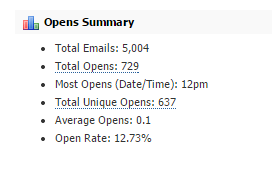 Total opens reflects the total times any given campaign was opened where the Total Unique Opens is the unique number of contacts who opened the campaign. So, if Total Unique Opens is 500 and Total Opens is 800 you could summarize it by stating that 500 unique contacts opened the email 800 times. This of course means that many contacts must have opened the email more than once. Also consider that if one of your contacts receives the campaign and forwards the email to others and they open the email it will count that open toward total opens but not total unique opens as it appears to the software to be the same contact.

The average opens is calculated by dividing the Total Opens by the number of contacts the campaign was sent to. This number is rounded to the nearest 10th decimal point. Thus this number is a reflection of on average how many opens were there per contact that was sent the email.

Calculated as Unique Opened / Sent To. Thus this represents the percentage of UNIQUE contacts that have opened this campaign.

Individual Links that have been clicked:

This would be better labeled as Total Unique Contacts that Clicked as it reflects the number of unique contacts that have clicked on any link during the period.

Calculated as Total Clicks / Unique Opens. Thus this represents the number of clicks on average per contact that opened the campaign.

Calculated as Unique Clicks / Sent To. Thus this represents the ratio of the the contacts who received the campaign that clicked on any given link at least once.